Edwidge Danticat ’90 is a celebrated and internationally renowned author known for her fearlessness and innovation in writing. A jack of all trades, Danticat’s career spans success in criticism, translation, literature, and film. 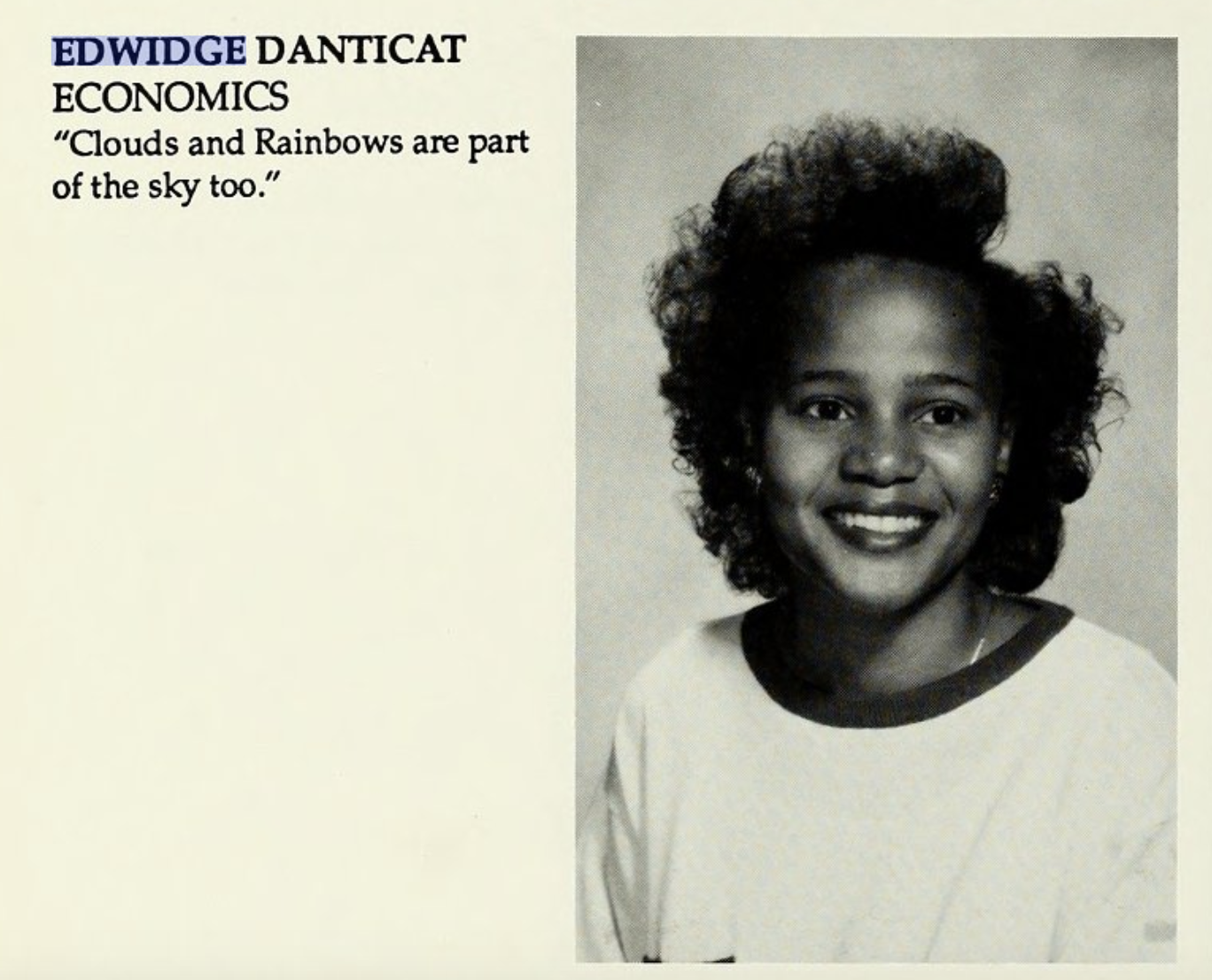 Danticat has published six novels to date, as well as numerous articles and the acclaimed memoir, Brother, I’m Dying (2007). Her short stories have graced the pages of the New Yorker and the Washington Post, and she has worked as a writer for two films, Poto Mitan (2009) and Girl Rising (Haiti) (2003). A MacArthur Genius Grant winner and three-time National Book Critics Circle Award nominee, Danticat has emerged over the past two decades of her career as a well-established voice amongst that of the most groundbreaking and recognized contemporary authors.

Born in 1969 in Port-au-Prince, Haiti, Danticat was raised by her aunt while her parents lived in New York City. The early period in her life instilled in Danticat a love and regard for Haitian culture which she has carried with her throughout her career. At the age of nine, she wrote her first story in her native Creole.

At twelve years of age, Danticat moved to New York and was enrolled in a magnet school in Brooklyn that prepared students for medical careers. Wishing his daughter to become self-sufficient and successful, her father encouraged her to be a nurse, but Danticat’s love for literature remained unfazed. Writing was a source of solace and means of expression during her high school years, a period in which she was extremely shy and found it difficult to assimilate to the fast-paced Americanness with which she was confronted. In her last two years of high school, some of her writing was published in local newspapers. The idea for Danticat’s first novel began to emerge through a piece published in New Youth Connections which evolved into a short story and basis for Breath, Eyes, Memory.

In the fall of 1986, Danticat entered Barnard College, where her skills as a writer were nurtured and refined. Her father’s goal for Danticat to become a nurse was overcome with the passion she developed for writing while studying in Morningside Heights. While balancing a full-time course load and an on-campus job at the Office of Admissions, Danticat still found time for her most beloved activity. She presented the first part of Breath, Eyes, Memory in a creative writing class at Barnard as an essay about her life. By the end of her senior year, Danticat had completed the first seventy pages of what would become her debut novel. Danticat graduated from Barnard magna cum laude in May 1990 with a B.A. in French, counting among her honors the Helen Prince Memorial Prize, the Howard M. Teichmann Writing Prize, and membership in Phi Beta Kappa.

Danticat went on to graduate school at Brown University, where she continued to improve her craft. Her senior thesis at Brown ended up becoming the basis for her first novel. The manuscript was promptly discovered by Soho Press, and her graduation from Brown with an M.F.A. in creative writing coincided with the publication of Breath, Eyes, Memory in 1994. Danticat’s innovative first novel, which draws on the lives and stories of four generations of Haitian women, was well received and hailed as a landmark representation of Haitian culture from a new and dynamic perspective. Jordana Hart wrote of Danticat’s work in the Boston Globe, “Her story gives voice, depth, and anguish to the loving, bittersweet ties that bind her to her circle of women … Breath, Eyes, Memory paints a rich portrait of a lush countryside, cane fields, rainwater baths … and illuminates the beauty and family life of Haiti.”

In 1995, Danticat’s second book was published by Soho Press. Titled Krik? Krak!, the collection of short stories, some of which were conceived and written during her year working in Barnard’s financial aid office after graduating, painted a portrait of the lives of Haitians and Haitian-Americans during times of political unrest and upheaval. Danticat had a special focus on women’s lives across divisions of age and class, the relationships among whom are at the core of Danticat’s fiction. Danticat spoke of her personal urgency to articulate women’s issues, as she is quoted in one of her interviews, stating, “In Haitian culture, women are taught to be silent, but I must write.” In the epilogue to Krik? Krak!, Danticat wrote:

“The women in your family have never lost touch with one another. Death is a path we all take to meet on the other side. What goddesses have joined, let no one cast asunder. With every step you take, there is an army of women watching over you. We are never any farther than the sweat on your brows, the dust on your toes.”

Praise for Krik? Krak! matched, if not exceeded, that earned by her first novel. In 1995, Danticat received the Pushcart Short Story Prize for “Between the Pool and the Gardenias,” a part of the collection Krik? Krak!. Her book was also a finalist for the National Book Award, making Danticat the youngest writer ever nominated for the honor. In addition, Danticat was also given the 1995 Woman of Achievement Award from Barnard and selected as one of the twenty best young American novelists in 1996 by Granta.

Off the heels of the extraordinary recognition earned by her first two works, Danticat’s third book, The Farming of Bones, was published in 1997. Her novel explores the economic, political, and social situations leading up to the 1937 massacres in Haiti on the orders of Dominican dictator Rafael Trujillo.

In 1998, one year after the publication of The Farming of Bones, Danticat appeared as a guest on the Oprah Winfrey Show to discuss Breath, Eyes, Memory, which had been selected for Oprah’s Book Club. Danticat’s appearance on Oprah simultaneously brought her celebrity status and a much broader audience than her works had previously enjoyed. Meanwhile, her literary stature was reaffirmed by the 1999 American Book Award for The Farming of Bones.

In 2004, Danticat’s The Dew Breaker was published by Penguin Random House, becoming a national bestseller and Finalist for the National Book Critics Circle Award. A series of interconnected short stories, The Dew Breaker was a stylistically innovative and remarkable novel that spans Port-au-Prince and Brooklyn and numerous lives. Three years after its publication, Danticat wrote Brother, I’m Dying!, an autobiographical memoir of family that discusses her adolescence in Haiti, her transition to life in New York, and the book’s present with Danticat in Miami with her dying father. Nominee for the National Book Award and Winner of the National Book Critics Circle Award, Danticat’s memoir garnered great critical enthusiasm and firmly established Danticat’s prestige amongst contemporary authors. Since the success of her memoir, Danticat has published two more works of nonfiction, Create Dangerously: The Immigrant Artist at Work (2011), and The Art of Death (2017). The former reflects on her identity as an artist and immigrant from a country embroiled in conflict, while the latter is a more abstract reflection on death and the literature that has attempted to articulate it.

Since the success of 2004’s The Dew Breaker, Danticat has authored two more fiction works. Her novel Claire of the Sea Light was published in 2013 and named a Notable Book of the Year by both The New York Times Book Review and The Washington Post, as well as being honored as an NPR “Great Read” and named a finalist for the Andrew Carnegie Medal for Excellence in Fiction. Most recently, Everything Inside was published in 2019, garnering Danticat her third National Book Critics Circle Award for Fiction nominee and second win.

In addition to Danticat’s decorated career as an author and novelist, Danticat has taught creative writing at New York University and worked with Jonathan Demme (creator of the film versions of Beloved and The Silence of the Lambs) on Courage and Pain (1994), a documentary about her native country of Haiti.

Danticat remains closely connected with Barnard, having returned as a distinguished guest speaker on multiple occasions, including the 1997 Helen Rogers Reid Lecture on the topic of “Migration and the Literary Imagination.” In 2011, Danticat was the first speaker of Barnard’s Africana Studies Program’s Distinguished Alumnae Series. In 2019, Danticat returned to campus as the keynote speaker for the Barnard Organization of Soul Sister’s Annual “Family Dinner.” This past February, Danticat spoke on a panel of first-generation Barnard authors alongside other novelists Mary Gordon ‘71, Mary Beth Keane ‘99 and Cecily Wong ‘10 for the event “Coming to Barnard: First-Generation Writers Talk about Learning Their Art.”

In 2000, Danticat received the high honor of being asked to write the foreword to the new HarperCollins edition of Their Eyes Were Watching God by Zora Neale Hurston ’28. A year later, one of Danticat’s short stories was selected for inclusion in Mothers Through the Eyes of Women Writers: A Barnard College Collection. This anthology of stories, all of which are written by Barnard alumnae and compiled by former Barnard President Judith R. Shapiro, focuses on intergenerational relationships among women of many cultures. In 2009, Danticat was honored with the MacArthur Genius Grant. This year, Danticat was honored with the 2020 Vilcek Prize in Literature. Danticat continues to inspire readers through her ability to illuminate both the harmony and the conflict between different cultures in the same land. At the root of Danticat’s art will always be her passion for the fearless craft of writing, for as she observes in Create Dangerously, “Create dangerously, for people who read dangerously. This is what I’ve always thought it meant to be a writer. Writing, knowing in part that no matter how trivial your words may seem, someday, somewhere, someone may risk his or her life to read them.”